Posted on May 4, 2018 by quiltpaintcreate

In case you missed the first post, this is a continuation of how I’m going about taking my sometimes vague ideas and moving them into form.

To start the process I chose three ideas I’ve wanted to explore for a long time. The first is this scrap bag. I was drawn to the bright colors. 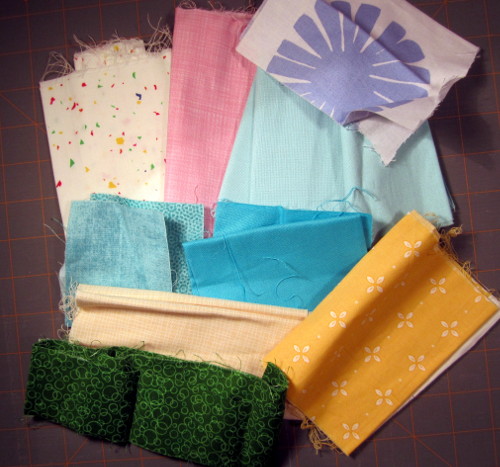 The second is this rough sketch I did eight years ago. The swan came from a book on stain glass. I thought the idea might work well in my next quilt in the Stitching To Dye series. 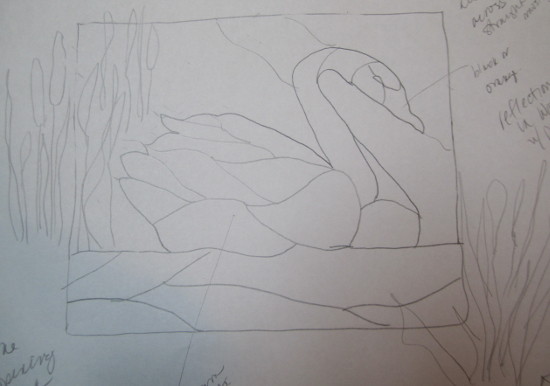 The last idea was something I sketched ten years ago based on a dream. For the record, I do not dream up quilt designs. This is one of maybe two or three times that ever happened. The shape reminds me of a paper pieced rose. 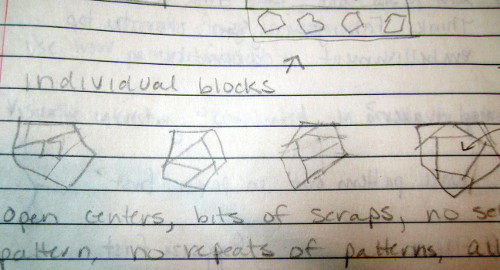 For lack of a better method, I stared at them a while and thought about next steps. I decided the swan would not be a good choice for the next Stitching To Dye quilt based on the “rules” for that experiment, so I tabled it until later.

I’m definitely drawn to idea #3. That one will take longer to get through the design process. I want to play with the shapes and colors a bit and think that will lead to the pattern, but one never knows.

That left me with the scrap bag. I already had an idea for the size (table runner) and the general design. Along with using the scrap bag, this quilt would incorporate other ideas I want to explore.

The scrap bag was the winner.

Once I get the scrap project far enough along to start thinking about the next thing, I will choose three more ideas and select again. I expect idea #3 will make the next idea pool. It’s one of those ideas that just won’t go away.

In the next post, I’ll talk about how I came up with the pattern.

This entry was posted in ideas, quilt design and tagged idea notebook, ideas into form, quilt design. Bookmark the permalink.

1 Response to Ideas Into Form #1

At the nexus of art and craft

A Personal Journey through Quilting and Home Life

Quilting, Scrapbooking, Gardening and whatever else catches my fancy

Quilting and other things I love in this colorful world